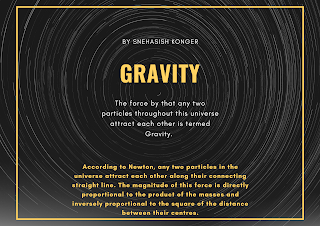 Definition:  The force by that any two particles throughout this universe attract each other is termed Gravity.

Definition: The magnitude of the force for which two unit mass objects attract each other from a unit, distance is called the Gravitational constant(G).

So, why the Gravitational constant is called Universal?

Well, it is just because of-

According to Newton’s law of gravitation, the force between two objects depends only on their mass and their distance. It does not depend on the condition of the two objects(solid, gas, liquid), chemical composition, temperature, and also the medium between them. So, it is called the Universal Gravitational constant.

What is Gravitational Field?

The space around a mass up to which another mass feels a force of attraction due to gravitation is called the Gravitational field of the former mass.

Proof: Acc. to Newton’s law of gravitation we know that  F=Gm1m2/r2 and from Newton’s 2nd law of motion we can easily say that for this attraction force m2 will accelerate toward m1  and experience a force F=m2.a

What is Gravitational Potential?

The amount of work that an external agent has to do to bring an object of a unit mass from an infinite distance to a point in the gravitational field is called the Gravitational potential of that point.

What is Gravitational Acceleration?

In the early 1600s, Johannes Kepler proposed three laws of planetary motion. Kepler was able to summarize the carefully collected data of his mentor – Tycho Brahe – with three statements that described the motion of planets in a sun-centred solar system. Kepler’s efforts to explain the underlying reasons for such motions are no longer accepted; nonetheless, the actual laws themselves are still considered an accurate description of the motion of any planet and any satellite.

1.    First Law: Each planet orbits the Sun in an elliptical orbit and the Sun is in the focus of that ellipse.

2.    Second law: The line connecting the Sun and any planet crosses equal areas in equal time. This law is basically the principle of conservation of angular momentum.

3.    The square of the time period of any planet (time of revolution of the planet around the sun,) is proportional to the cube of the semi-major axis of the elliptical orbit of that planet i.e T2∝ R3.

The coldest Place in the Universe with a unique shape

Is light attracted by gravity? | Let’s find out

Do you know what is a geomagnetic storm?

Does space move through time or vice versa?

What Is the James Webb Space Telescope?

Tachyon Particles: Are they really faster than light?