If this question ever arises in your mind, then today you’ll get the answer by reading this article.

First of all, programming isn’t a small thing, it is a wide domain.
But before going straight to that, first, let us know what is programming actually.

Although the word, programming sounds very unfamiliar with our day to day life, we are very used to the word programming.

Programming is nothing but a way to instruct computers to perform various tasks.

Let’s understand this with a very simple example.
Let say, your mom wants to cook fried rice. So she searched for ‘long grain rice’. But she found that there is not enough rice in the house. So she sent you to the grocery store to purchase 1kg of good quality long-grain rice.
She ordered you to go to the nearest grocery store and purchase that amount of rice.
Here, your mom assigned you a task to complete. This is called programming.

then you can’t complete the task, otherwise you’ll successfully get the rice.

Now, we’ve learned that programming is to give computer instructions. But to give something or someone instruction, we need to communicate with that first. And for that, we need languages, those types of language that both can understand. This language is called programming language.
So,

But computers only understand the language of 0 & 1, which is known as binary language. Computers can only understand the combination of 0 & 1.
For example,
When we write ‘A‘, the computer understands ‘01000001‘.
Now clearly, if we go for this and keep writing binary language to communicate with computers for even a simple task, it will take a huge time for us.
So, for that what we did?
We developed some high-level languages and a translator to convert the high-level language to machine-level language. This gave us two advantages.

Now, these languages are known as programming languages.

The language required to communicate with the computer to give it instructions is called programming language.
Example- C, C++, C#, Python, JAVA etc.

And writing these languages to instruct our computer for a particular task is now called coding.

Coding is nothing but the way of communicating with computers with the helps of codes(like- C, C++, Python etc).

Difference between coding and programming:

For more difference, you can go to Upgrade.

Now you might be thinking why I waste so much time just explain “Programming”.
This is just because to give you a brief knowledge about programming and coding, as many of us don’t even know that these two has a separate meaning. Now coming to our main question, which is now definitely changed slightly.

Which language is for which programming domain?

There are 4 types of Programming Languages:

Now let’s see Domain-wise language distribution.
This distribution helps you to clear your doubts that in your chosen domain, what exactly you’ve to learn.

Here in this table below, we’re going to know about some mainstream domains and the most used languages on those domains.

These are some mainstream domains and most languages used to that domains.

We’ve learned what are those important languages, now let’s see the best platforms to code.

So, that is it.
Thank you for reading. Hope this post help you to find your answer. If you want to know something more, then you can comment below.
And don’t forget to subscribe our newsletter. 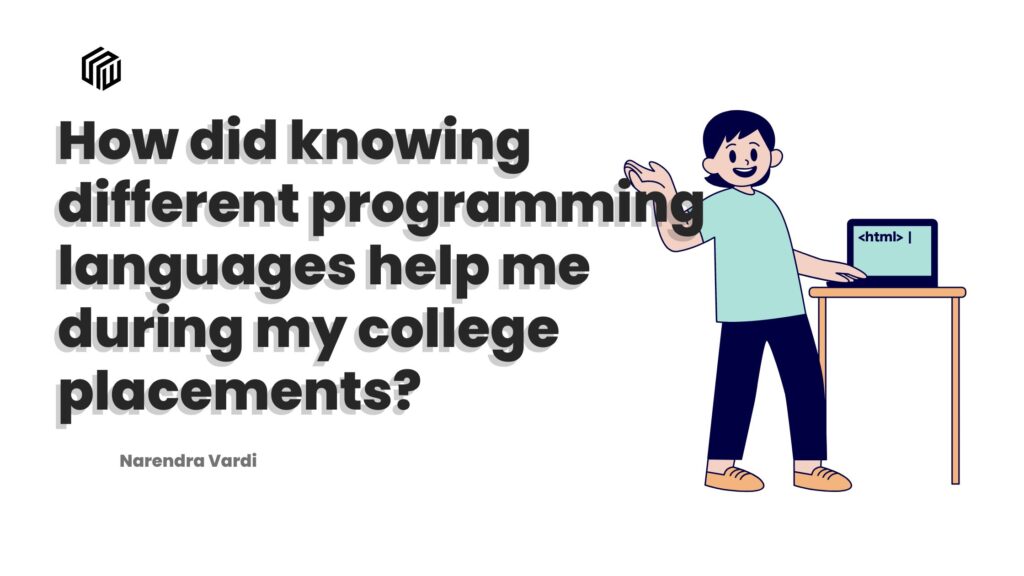 How did knowing different programming languages help me during my college placements?